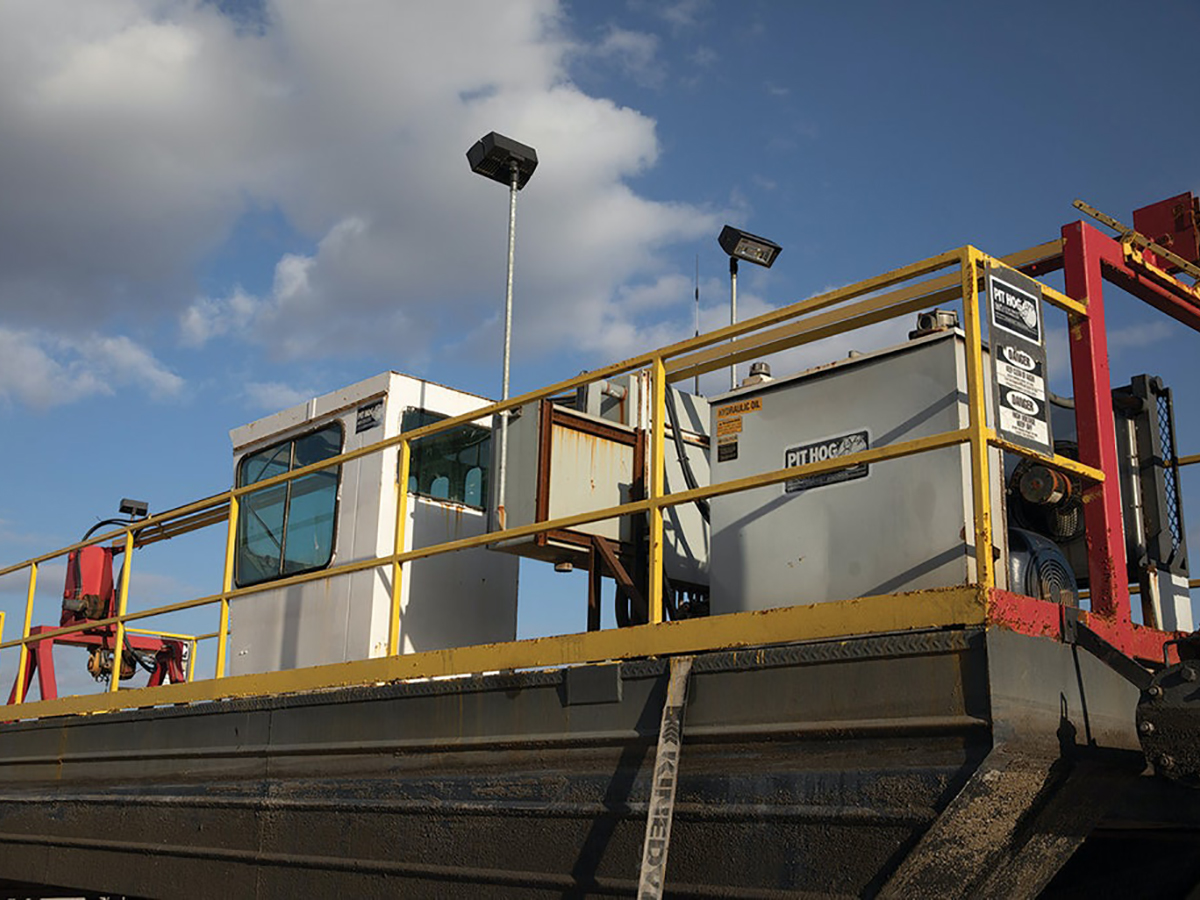 Sioux Falls biosolids land application program strives for precision in applying nutrients at agronomic rates for the crops to be planted.

Anyone who thinks biosolids application is just a matter of driving a tank truck across a field needs to visit Sioux Falls, South Dakota.

Philip Greenwood and his team take the same sophisticated approach when applying the city’s Siouxpergro liquid biosolids as progressive farmers take in using manure or commercial fertilizer on their land.

The team uses a software-based technology to apply the material at 6 percent solids at precise agronomic rates, tailored to the soil nutrient content and the needs of the crop. “In reality, we’re municipal farmers,” says Greenwood, residue coordinator with the city of Sioux Falls Water Reclamation Division.

Each year the Sioux Falls Water Reclamation Facility produces about 2,800 metric dry tons of biosolids, most of it injected into the soil on corn and soybean fields or surface-applied on hay ground. The program dates back to 1995 and has operated essentially the same way since, except for periodic upgrades to stay current with application technology.

Sioux Falls dewatered and landfilled its biosolids before turning to beneficial use in 1995. The program started out strong and has persisted, says Greenwood, in his ninth year with the Water Reclamation Division and five years into his current role.

“The person the city hired to start up the land application process had a farm background,” Greenwood says. “He knew a lot of farmers and basically started knocking on doors asking if they were interested in the product. He did a good job of sales and got a lot of farmers signed up. I inherited 95 percent of the current customers from him. Occasionally a neighbor sees what’s going on, calls and asks to be signed up. All our customers are happy 95 percent of the time.”

The water reclamation facility (21 mgd design, 17.4 mgd average) has a tertiary process that starts with a three-channel rotary drum screen (HUBER Technology) and an aerated grit chamber. After four primary clarifiers, the flow passes through first- and second-stage trickling filters, each set followed by intermediate clarifiers.

A pump station delivers the flow to the activated sludge process consisting of six trains, each three basins long. Air is delivered by two of four Roots blowers (Howden) by way of coarse-bubble diffusers. That is followed by four standard concrete secondary clarifiers, anthracite fixed-bed media filters and chlorine contact before discharge down a cascade aerator to the Big Sioux River. “We only have to chlorinate during whole-body contact season, which is May through September,” Greenwood says.

Primary and secondary sludges pass through a gravity thickener before being pumped to four anaerobic digesters, fed alternately for four-hour intervals. Digested material is pumped to a pair of 8.5 million-gallon lagoons. An electric-over-hydraulic dredge (Mud Cat, Division of Ellicott Dredge Technologies) then feeds the trucks with material for delivery to the farms.

The digesters’ floating covers are being replaced with fixed covers and new mixers. The biogas feeds a cogeneration system with three engine-generators (two Caterpillar Inc., Electric Power Division, and one Jenbacher/GE Energy Management). That system produces about 40 percent of the facility’s electricity.

In the early years, a balloon-tire TerraGator machine (AGCO) injected the material into the soil. Today, the team hauls the biosolids with three semitractors pulling 6,500-gallon tank trailers. They apply the material with a Balzer slurry wagon developed for cattle and hog facilities and modified by the manufacturer for biosolids. It is pulled by a Challenger MT955C tractor (AGCO).

To support a true agronomic-rate application, the team uses the Balzer Rite-Rate system, which enables accuracy to within 10 gallons per acre. The Balzer Magnum injection system is a heavy-duty implement designed for incorporating manures. On corn and soybean ground, biosolids are typically injected 6 to 8 inches deep. “We have the ability to go down to about 12 inches if somebody wants us to go that deep, but that gets a little hard on the equipment,” Greenwood says. Hayfields receive surface applications during summer.

Put to the test

Accurate agronomic application requires thorough testing of the biosolids and the soils in compliance with South Dakota and federal regulations. “All material that goes out to our lagoons is sampled once weekly for ammonia, TKN and percent solids and once monthly for heavy metals,” Greenwood says. “Fecals are done the first seven days of the month.

For soil testing, the team contracts with a local provider. “We do the soil sampling as soon as the field is harvested and the farmer has contacted us,” Greenwood says. “For any field 40 acres or under, we take 20 samples and composite them together, both for the upper 6 inches and at 6.1 to 24 inches. Every additional 40-acre piece also requires 20 samples.” Biosolids are then applied uniformly across the fields at a rate determined by testing and the crop requirement.

South Dakota has statewide general biosolids permit. “As the biggest entity in the state, we have a recurring permit and we’ve got a few more restrictions than many of the small towns that land-apply just once every few years,” Greenwood says. “We have to pre-submit all our fields just one time.”

For each site, Greenwoods sends the state Department of Environment and Natural Resources an aerial photo denoting roads, houses, and wells (which require a 300-foot setback), waterways and soil types. “Being so close to the Big Sioux River, there’s a source water protection district in place,” Greenwood says. “We’re not allowed to apply anywhere within that district. If it’s relatively close, we’ll indicate on the aerial photo where it is.”

New fields also require a newspaper notice of a 30-day public comment period. Based on the information supplied, the DENR approves or rejects the field. Once approved, a site can receive biosolids without any further notice to the state. The DENR does receive an end-of-year report on all sites where Siouxpergro was applied.

The Siouxpergro program has about 4,000 acres permitted, owned by only about a dozen farmers. “Most of our customers farm 2,500 to 5,000,” Greenwood says. “It helps that our customers have large operations.”

The spring land application season typically starts in late March and runs until about June 1. “Spring is really weather-dependent,” Greenwood says. “That’s the wet season, so it’s three or four days here, three or four days there. Very rarely will we get a dry spell where we can apply for two weeks in a row.”

The fall season starts around the end of August with application on hayfields. There’s sporadic application in September as farmers harvest early soybeans and clear silage fields. Then work continues until about mid-November.

Public objections to the program have been almost nonexistent because most sites are well-removed from residential development. “Our area is heavily agricultural,” Greenwood says. “Typically it’s one house on a mile stretch of road. We have some legacy fields that development has popped up around. We try not to sign up new fields next to subdivisions.”

The distance to the field ranges from 2 to about 20 miles; the average is 13 miles. Hauling costs are significant, and so is the challenge of keeping the truck fleet up and running. The trucks travel many roads with weight restrictions. As a result, they generally haul 6,000 gallons rather than the full 6,500-gallon capacity.

Another challenge has been keeping up with the city’s growth. Sioux Falls is a regional banking center and is home to two of the region’s largest hospital systems. A large and expanding meat processing plant is bringing new jobs and new residents to town.

“At the program’s inception, everything was handled nicely with the staff size we have now,” Greenwood says. “As the town grew, we went from eight-hour days to 10-hour days. Now, during the season we’re working 12-hour days, six days a week. Periodically, we recruit help from our other teams at the water reclamation facility and run 24-hour operations. We did the math, and it was cheaper to pay our team a lot of overtime than to bring in a contractor.”

The team has handled the challenges with dedication and professionalism, Greenwood observes: “The quality of work never suffers. The guys know where they can and can’t apply. If something doesn’t look right, they call me and we go talk with the farmer and see what’s going on.

“The guys are out there working hard for long hours, getting the product onto the fields and doing it in an effective and safe a manner as anyone can expect. I’ve been in charge for five years and we’ve had almost no incidents outside our gate of biosolids spills or anything going where it shouldn’t go. The guys do a heck of a job.”

Stepping up to Class A

Sioux Falls biosolids production is outpacing the land application program’s capability. “The community has grown a lot since this program was put in place,” says Philip Greenwood, residue coordinator. “Our production has grown by 2 to 3 percent per year, and we’re at our maximum capacity.”

The answer? A new biosolids process. “We just completed a master plan, and the recommendation is that we are going to dewater and dry the material. We’re looking at 92 percent solids to meet EPA Class A. Because we have no metals concerns, we will be exceptional quality (EQ) as well.”

The technologies to achieve Class A will be determined by a design engineer selected in early 2019. The rationale for Class A came down to cost. “To expand our liquid program, the investment was going to be substantial,” Greenwood says. Equipment was a minor cost component; the big item was adding four to five year-round staff members for an operation lasting less than half the year.

After the change to Class A, Siouxpergro will still be available to farmers, but city staff will no longer handle the land application. Biosolids field staff will shift to operating the dewatering presses, the dryer, and the storage facility. In the long run, Greenwood would like to see city residents use the product on their lawns and flower gardens.

Ultimately, he would like to see it used to fertilize parks, ballfields, and other city properties: “That’s my ultimate goal.”