At Eagle River Flats, the challenge was to remediate the white phosphorous but leave the UXO (unexploded ordnance) behind. The solution was a dredge system that can withstand a big bang.

Eagle River Flats, an estuarine salt marsh located at Fort Richardson in Alaska, has been used by the armed forces for over 50 years as an artillery impact area. During the 1980’s, thousands of dead and dying waterfowl were found in this area during the critical spring and fall migrations. A group of researchers from the U.S. Army Cold Regions Research and Engineering Laboratory (CRREL), working in conjunction with the Environmental Resources element of the Fort Richardson Directorate of Public Works (DPW), discovered the cause of these massive die-offs: white phosphorus. 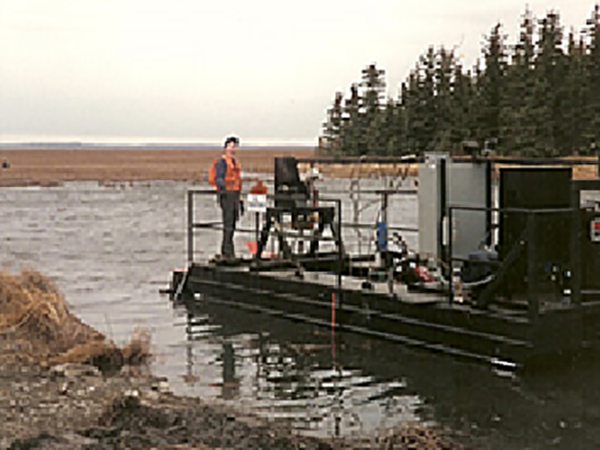 White phosphorus was used by the Army at Fort Richardson in targeting and obscurant rounds. Investigations of the environmental fate of white phosphorous at Eagle River Flats indicated that the contaminant is most problematic in sediments of permanently ponded areas. Engineers at CRREL conducted a feasibility study on dredge removal of those contaminated sediments. Two primary considerations for the design of the dredge system were the operation’s environmental impact and the unexploded ordnance. Consultations with the Ordnance and Explosives MCX and Design Center in Huntsville indicated that the preferred solution in this case would be to exclude the unexploded ordnance from the dredge and leave it in place. The final system configuration deployed was a small remote-controlled auger head-type dredge designed and built by Ellicott Dredge Technologies, LLC® with a CRREL-designed cutter-and-grate ordnance exclusion device mounted to the dredge head.

The EDT dredge system consisted of a remotely controlled dredge with a 8-foot wide auger head; an armored, shore-based control cab; a video feed-back system for operation and sensor monitoring; and a shore-based diesel generator. A retention basin for the sediment was designed with assistance from the Corps of Engineers Alaska District and construction by the Fort Richardson Directorate of Public Works on the adjacent explosives ordnance disposal (EOD) pad.

The EDT dredge design minimized damage from possible ordnance detonations and adverse environmental effects. The slurry pump is located 15 feet from the dredge head, and the electrohydraulic power pack is on the rear of the dredge, 25 feet from the dredge head. The hydraulic fluid is vegetable based to eliminate spill toxicity. The hardened control cab, located on shore, was tested by the 176th EOD Detachment by setting off two 105-mm high-explosive rounds 100 feet from the cab. Control of the dredge is by wire, with power to the dredge through an electrical cable running parallel to the floating spoils line. The retention basin contains two fenced splash pads to restrict dispersal of any small ordnance that may pass through the dredge head grates.

The EDT dredge system was successfully deployed at Eagle River Flats during a summer season. About one acre was dredged, and the spoils were pumped to the retention basin, where the supernatant was decanted from the steeled sediment. As the sediment dried, the white phosphorus naturally remediated through sublimination. The treated sediment will be used to cap the adjacent EOD pad, which is a Superfund site. Analysis of the spoils sampled during transport to the basin indicated that about 20% of the samples contained detectable levels of white phosphorus.

The Eagle River Flats remediation project is unique in that it occurred in an active impact area. The issue of unexploded ordnance was critical in the design and implementation of the dredging project. Field testing of the system was under the watchful guidance of the 176th EOD Detachment at Fort Richardson. The ability to dredge in the presence of unexploded ordnance was key to the success of the remedial investigation and the subsequent contractor-run operations. Although the firing of white phosphorous into wetlands has been prohibited for five years because of CRREL’s investigations at the Flats, white phosphorous continues to be problematic. Its presence in wetland impact areas is not confined to Fort Richardson, and the experience gained from the Flats should be valuable elsewhere.

Mr. Walsh works with the U.S. Army’s Cold Regions Research Engineering Laboratory. Since 1994, he has been involved in the Army’s investigation and remedial investigations at the Ft. Richardson firing range impact area on Eagle River Flats.