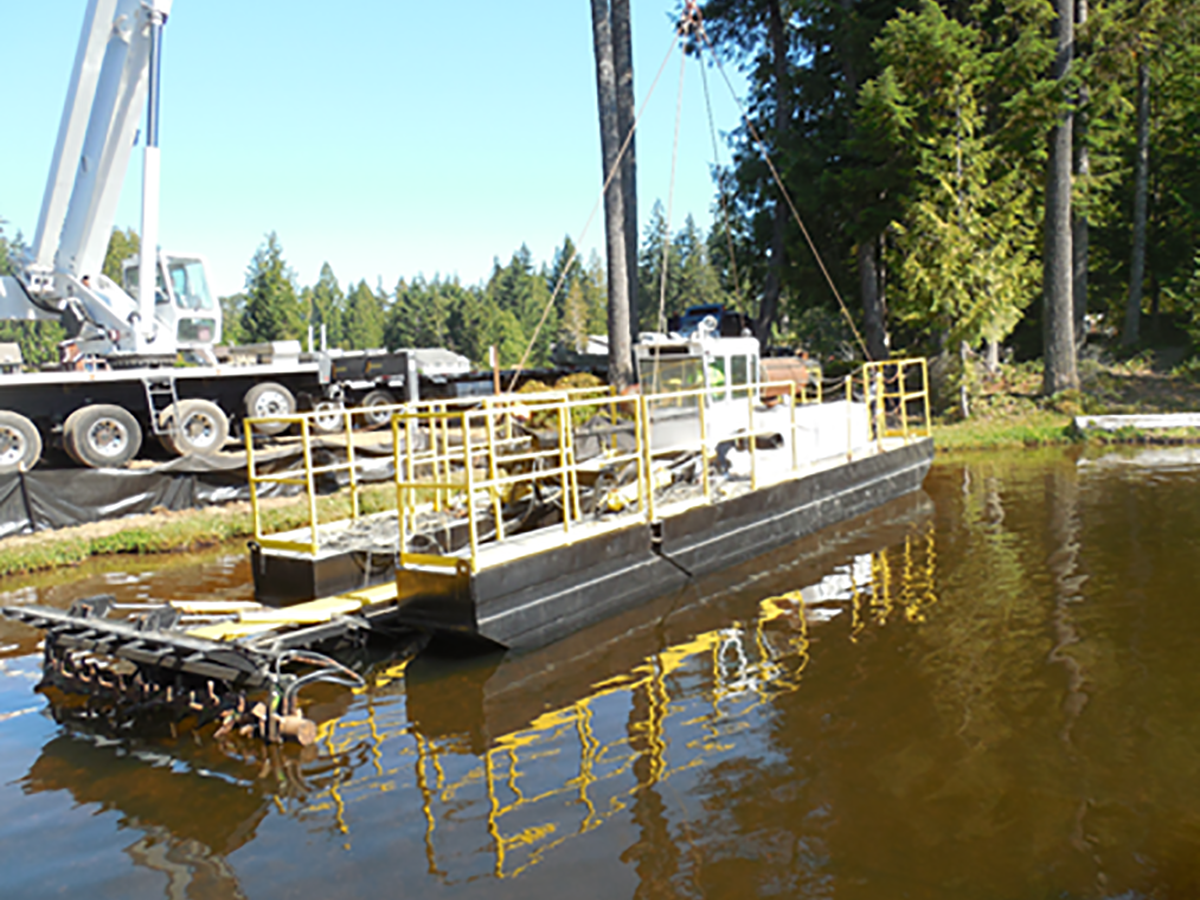 Lake Limerick is a small (129 acres) reservoir built-in 1966 primarily as a new recreational lake for those who wanted to escape the hustle and bustle of Seattle. Initial property investors were a diverse group, some of whom still live in the same homes today. Today, homeowners are combination retirees, working-age and weekend residents, who enjoy a beautiful recreational resource and a private golf and country club that welcomes public visitors.

Over the past 50 years, the drainage surrounding Lake Limerick has seen significant timber harvest. Two tributaries have brought massive quantities of sediment to the lake, resulting in the loss of in-lake fisheries habitat and recreational use. Tributary mouths showed cumulative impact from delivery of sediment during high flow months. Historically, one of the tributary drainages (Beaver Creek) had significant beaver activity that has disappeared as development increased in the area.

Lake Limerick has a maximum depth of approximately 18 feet (mean depth 9 feet) in two basins (Figure 1). The lake area is 129 acres with a shoreline of 4.4 miles. Two major tributaries, Beaver Creek and Cranberry Creek, are sources that maintain the level of the lake and vary seasonally.

Parts of Lake Limerick were dredged thirty years before this project using a vacuum dredge line with upland spray disposal depositing materials on-site that formed Log Toy Island (a community resource used for picnicking and a playground). The current project was focused on improving in-lake fisheries habitat by dredging fine sediments that covered the mouths of two tributaries to the lake. The fine sediment had migrated into the reservoir, shallowing a large area used by shoreline residents. Dredging would increase the depth of the reservoir along with shoreline areas and improve swimming and boating for shoreline homeowners.

Several goals were established while planning and designing the dredging program in Lake Limerick. King’s Cove and Cranberry Cove were identified as important areas for restoration, first by improving thalweg gradient (the deepest portion of the channel) for each tributary so that a defined channel extended out into the lentic environment. Deepening the thalweg channel encourages the movement of soft sediments during high flows into deeper areas of the lake. Dredging all materials from the two coves would be cost-prohibitive; improving thalweg gradient encourages sloughing of remaining fine sediments from nearshore areas and enables tributary current to do part of the job. Removing a combined 5,000 cubic yards of soft sediments from the two coves would expose more of the hard substrate in these areas and encourage re-establishment of benthic communities used as a food source and improve fish spawning areas. Stakeholders who granted permits expressed concern to both the Squaxin Island Tribe and the Washington Department of Fish and Wildlife about disturbing fine sediments that would increase turbidity in the lake and harm important fish species.

The dredging project areas are outlined in Figure 2. These two tributaries had contributed major quantities of sediment that formed large sills further out in the lake and were the targets for removal and increasing thalweg depth. The drainage area for each tributary is indicated as a proportion of the entire Lake Limerick basin. Cranberry Creek represents the largest area drained (61 percent of the watershed) in the basin.

Design of the dredging approach considered many variables. The most important was to prevent head-cutting of the underlying hard sediment near the mouth of each creek as it entered Lake Limerick. The resource agencies and tribe identified the areas in which head-cutting could occur and limited where dredging activity would be allowed. Site surveys of each cove, mapping of the upper and lower boundaries for dredging, and measuring approximate depth and consistency of the sediment were completed pre-dredging.

The total amount of dredged material (solid and moisture content) was limited to 5,000 cubic yards. The pre-dredge survey was used to estimate swaths that could be dredged in each cove, the volume of material that would be removed, and sloughing that would occur as material fell into the swaths. Also taken into account for dredging transect placement was current from high flows (freshets) in both tributary streams that would facilitate sloughing.

Dredging transects in King’s Cove consisted of a single longitudinal line intended to increase thalweg depth and gradient (Figure 3; Point A to Point B). Three additional lateral transects were placed to improve the erosion of shoreline fine sediments that would be transported during high flows to deeper portions of the cove. Two of these lateral transects (Point C to Point D and Point G to Point H) were perpendicular to the long transect to mobilize fine sediments during freshets. One of the lateral transects (Point E to Point F) was placed near a shoreline that would mobilize nearshore fines to deeper water in King’s Cove.

Dredging transects in Cranberry Cove (Figure 4) consisted of a single longitudinal line intended to increase thalweg depth and gradient as well as to clean fine sediments from a more extensive shallow area delta formed at the mouth of Cranberry Creek (Figure 4; Point A to Point B). Two lateral transects were placed near the upper and lower end of the longitudinal dredge line. A third was placed parallel to the shoreline (Point E to Point F) to promote sloughing of fine sediments by wave action and current from Cranberry Creek to deeper areas of the cove.

Fine sediments from Lake Limerick were removed with the MudCat® dredge including a boom with a cutter head (Figure 5). Sediments were loosened with the cutter head, mixed with additional water to form a moveable slurry, and pumped through a floating pipe to Log Toy Island for storage in GeoBags®. Fine sediments are thicker when dredged and are mixed with water for easier transport through the floating pipe.

Fine sediments can become consolidated forming harder masses depending on soil type and presence of aquatic plants. A cutter head at the end of the boom on the MudCat has tines that break up the consolidated sediment and uproot vegetation to make suction removal easier (Figure 6). The shield on the cutter head is intended to reduce or eliminate the suspension of fine materials that would increase turbidity near dredging activity.

Fine sediments were transferred through a dredging pipeline using in-line pumps positioned to keep the slurry moving. The booms are floated on the surface of the lake with buoys and transfer materials to one of two de-watering Geobags® (Figure 7). Before entering the de-watering bags, the fine sediment slurry was mixed with a biodegradable organic polymer (Aquamark®) (Figure 8) to pull all fine sediment from solution and encourage water to drain more rapidly from the bags (Figure 9). De-watered dredge material was trucked to a nearby landfill approved to receive and store material from the lake.

Water quality during dredging was monitored for any increases in turbidity next to the dredging equipment, near the inside edge of a turbidity curtain, and immediately outside the turbidity curtain. This was a condition of the county environmental permit intended to moderate any influence on in-lake fisheries. Increase in turbidity greater than 5 NTUs (Nephelometric Turbidity Units) above background were considered in exceedance of the state water quality standard. Turbidity during dredging operations did not exceed the state criterion (Figure 10).

Increases in turbidity have a direct effect on juvenile and adult resident fish in the lake. Increased turbidity can reduce light and affect the visual range of fish, contributing to predator success or avoidance, depending on life stage. The duration and magnitude of turbid conditions during dredging can impact the fishery.

Dredging cut lines were made along transects described in Figure 3 (King’s Cove) and Figure 4 (Cranberry Cove). The deeper cuts encourage sloughing of shoreline fine sediments, especially during freshets that increase discharge from tributary creeks to each of the coves. The fine shoreline sediment is carried to deeper water further out in the cove when flows are higher. The difference in water depth before (<0.5 feet) and after (3.5 feet to 4.0 feet) dredging moves fine sediments when tributary velocity is high (Figure 11).

In contrast, where fine sediment was not as deep, dredging was able to remove a broader swath of fine sediment and expose hard sediments on the lake bottom (Figure 12). Sloughing of shoreline fine sediment will occur here as freshets from the input tributary to the lake increase discharge.

Similarly, the thalweg transect depth at Cranberry Cove was increased, on average, between two and two-and-a-half feet (Figure 14). The hard sediment depth is fairly uniform in Cranberry Cove once the dredging distance was about 150 feet from the upper end of the dredging zone.

Dredging improved water depth along transect dredge lines in both Cranberry Cove and King’s Cove. Increased water depth enabled better access to inflow tributaries for winter steelhead, coho salmon, and resident cutthroat. In addition, exposing hard sediment is expected to produce a more diverse benthic community than the current one dominated by amphipods, dipterans and worms. In-lake spawning habitat has been expanded by clearing fine sediment from the hard sediment. The ecological function has been restored at multiple trophic levels and both food base and fishery have the chance to improve.

Recreational opportunities in the coves affected by fine sediment and shallow depths in the 30 years since initial dredging should improve with the removal of the sediment, allowing better access, swimming, fishing, and aesthetics. The successful outcomes from removing fine sediment from Lake Limerick coves suggest that periodic dredging can benefit both fisheries and recreation.