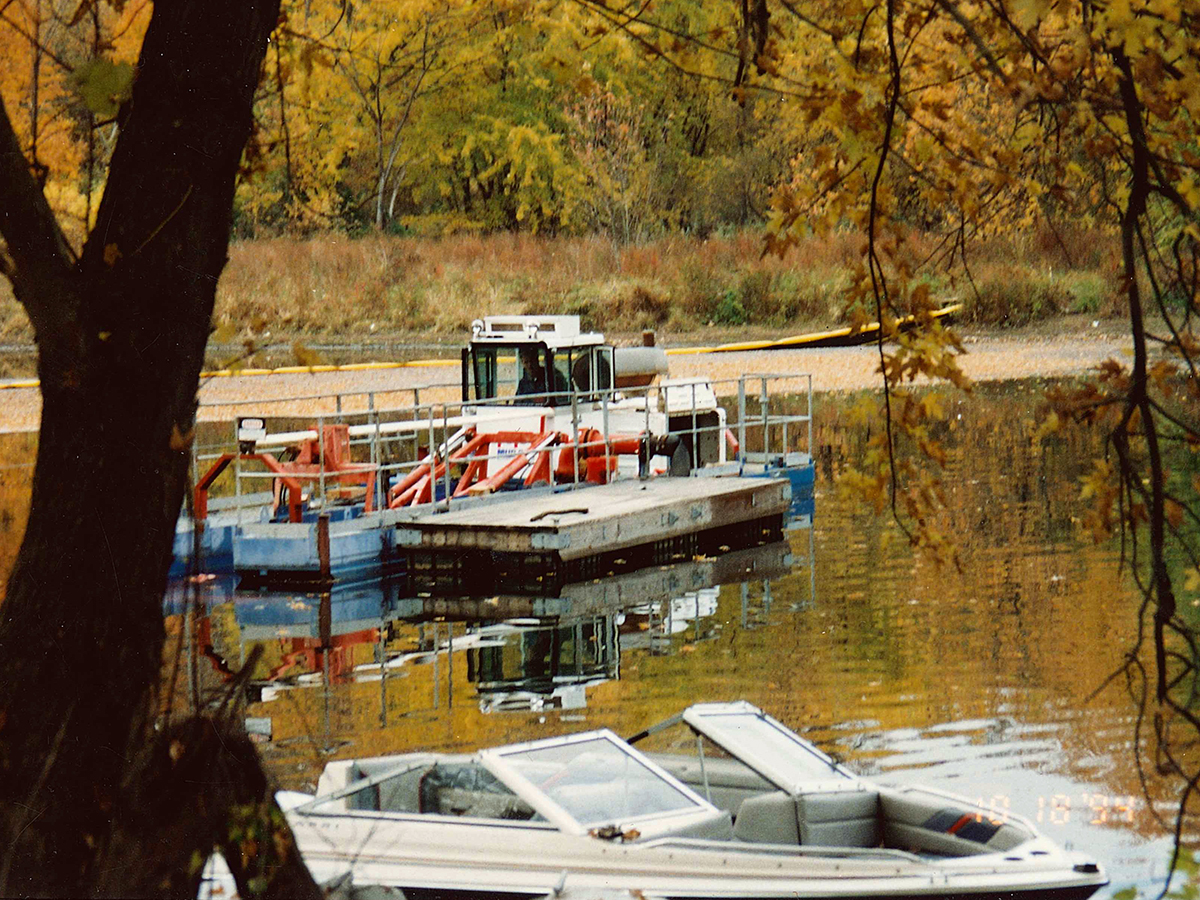 For the past 15 years, residents of privately-owned Lake Tishomingo have watched their lake slowly deteriorate from a gradual buildup of choking siltation. As the problem grew in magnitude, they explored the possibility of obtaining government assistance, but finally decided to take matters into their own hands before it was too late. Homeowners in the community leased a Mud Cat, a portable dredge, together with accessory equipment, and within a few months they were winning the battle.

Lake Tishomingo is a 120-acre artificial lake located southwest of St. Louis, Missouri. Its name is derived from an Indian word for “healing waters.” Developers envisioned the newly-created lake community, built between 1947 and 1950, as the perfect setting for “vacation living every day,” with a short 30-mile commute to the heart of St. Louis.

In the wake of postwar development, forested lands near the lake were cleared for farms and residential areas. Tishomingo has a natural watershed system and the removal of virgin ground cover increased topsoil runoff, causing silt to built up on the lake bottom.

A water quality problem resulted from the accumulating sediment, which produced an over-abundance of aquatic weeds. Together, these problems made boating impossible in some areas, limited fishing, and caused a water pollution problem.

For more than a decade the Lake Tishomingo Property Owner’s Association tried to solve their problems by drawing the lake level down about four feet each year between October and December.

During these drawdown periods, excavators attempted to remove sediment build-up from coves, using bulldozers. Although some sediment was removed in partially dried out areas, the bulldozers could not operate in the soft, mucky silt. The lake wetlands were also too soft to support other heavy equipment.

Attempts were also made to remove silt from the main channel with draglines, but there was little progress: the dragline bucket stirred up the silt and caused turbidity. The silt, in suspension, would simply separate itself in the lake, causing additional problems.

Finally, members of the association formed a silt removal committee and charged it to solve the sediment problem. Jewel Lindsey, a Tishomingo resident for more than five years, was named chairman. He reports, “Our only objective was to get the lake cleaned and restored. Members of our committee traveled to neighboring states, studied a variety of on-site cleanup alternatives and reported their findings.”

Committee members also looked at conventional dredges, but concluded that they were too expensive and too large to operate in the shallow areas and numerous small coves which needed dredging. Residents also turned down the idea of drastically lowering the water level for entire summer to accommodate draglines, front end loaders and bulldozers.

One reason for rejecting this clean-up method was that the lake rests on relatively thin rock formations which could crack under the weight of the heavy equipment, causing openings which might drain the lake. Also, during the long drawdown period envisioned, the residents would have virtually no use of the lake. They also feared that Lake Tishomingo would not be able to replenish itself after the cleanup. There had been a recent history of low rainfall in the watershed area.

Eventually, a member of the committee read about the Mud Cat, a small, portable dredge marketed and sold by Mud Cat International of Baltimore, Maryland. It appeared to be the best alternative from several standpoints the cleanup could take place without lowering the lake: residents would still be able to enjoy all their summer water sports; and the machine was small enough to operate in the shallow, heavily silted upper end of the lake. The Mud Cat could also perform selective dredging in the long, narrow coves which contained from one to two feet of silt.

As compact as it is – 8 feet wide and 39 feet long – the Mud Cat is equipped with a 175-horsepower Detroit Diesel engine. This motor drives a pump capable of removing up to 120 cubic yards of sediment per hour. Its auger can cut out up to 18 inches of silt per pass in depths to 15 feet below the surface of the water.

The key to the effectiveness of the dredge is the eight-foot wide auger attached to a hydraulic boom at the front end of the machine. A mud-shield surrounds the auger minimizing turbidity. As the auger rotates, it cuts out and feeds the silt deposits to a center intake tube where the material is sucked up by the pump, which provides the energy to propel the silt, suspended in water. through an eight-inch diameter discharge pope over distances up to 3,000 feet to a designated disposal area.

On the Lake Tishomingo project, the Mud Cat is being used with two additional booster pumps to deliver the sediment through approximately 9,500 feet of pipeline to the disposal area on a nearby farm. There are three levels to this disposal area, which act as individual containment ponds for the sediment as it moves across the land. The sediment settles out onto the field and the water runs off over a controlled spillway structure to a nearby stream.

The quality of the disposal area runoff water is constantly monitored by the Missouri Clean Water Commission. Samples are taken regularly by the Lake Tishomingo project superintendent and submitted to the commission for testing. Clarity of the water being returned to the stream has been termed “excellent,” indicating that the disposal area is permitting settling of virtually all silt.

The long pipeline which carries the silt to the disposal area is required to pass over both land and water. It is coupled together in 39-foot long sections.

The pipe (Driscopipe 7600) is composed of ultra-high molecular weight, high density polyethylene. It conforms to the steep ground contours without disturbing property owners, thanks to the tight leak-free joints. The pipe ran across the surface of the lake supported by special floats. Steel flanges were added to protect the pipe from wave actions caused by passing boats.

Boat accessibility from docks to the main recreational areas of the lake is maintained by removing floats from the pipeline, allowing the unsupported section to sink two to three feet beneath the surface. This permits boats operating at reduced speeds to pass over the pipe safely.

More than 80,000 cubic yards of sediment have been removed from the lake bed. Fishing areas that had been silted over are showing signs of coming back to life. A swimming beach near the community center was badly silted over; now it’s clear, clean and suitable for water sports. Boats that have been in storage for several years because of the siltation are back in the water. The lake looks as it did 20 years ago, according to Lindsey, who adds that there will be a continuing effort to see that it stays that way.