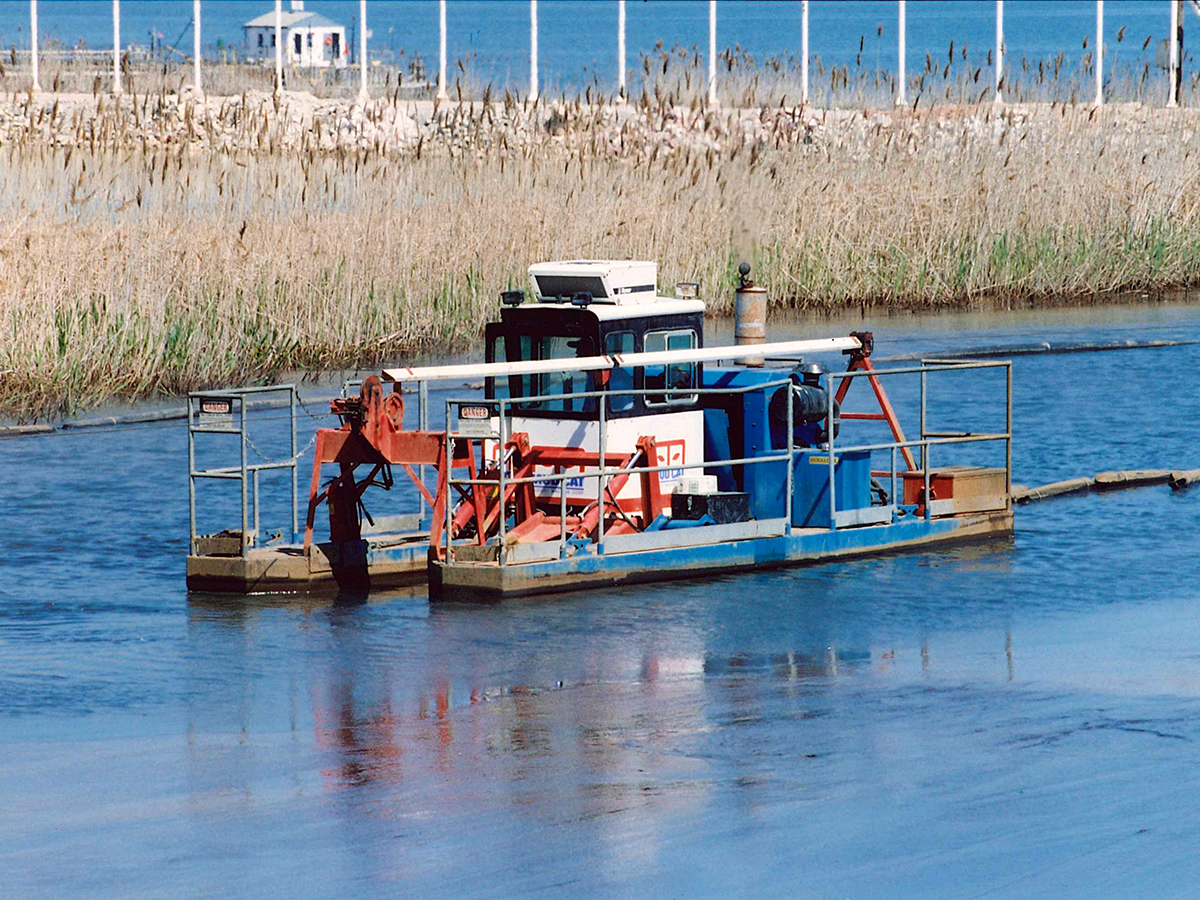 A new machine called a “Mud Cat” has been developed expressly for the task of ridding lakes, streams and channels of undesirable sediment buildup.

Small as such equipment goes, the “Mud Cat” is in reality a floating barge equipped with a powerful diesel-driven pump capable of sucking up in a single pass sediment deposits that are 18 inches deep and 8 feet wide. By making multiple sweeps, it can clean out 40 to 80 feet of shoreline to a depth of more than ten feet and as far out as 125 feet-all in a single working day.

By means of its underwater auger “Mud Cat” chews up the sediment, lifts it by vacuum action and carries it off, seaweed and all, without endangering the sea life present. Discharge from the machine (as far as 2500 feet away) makes desirable fill, normally placed on low-lying adjacent lands.

There are numerous cases of successful applications of the “Mud Cat” – cases where sluggish channels have been freed of silt and aquatic growth, where swimming beaches have been created along what had previously been mucky, weedy shores, where clogged irrigation canals have been opened up to original capacity, and where settling ponds have been emptied and restored to vital usefulness.

One example of how effective a “Mud Cat” can be is in evidence at the refinery of Imperial Sugar Company, Sugar Land, Texas. Here an arterial canal called Oyster Creek provides a source of water for cooling the refinery’s production processes.

Originally built in the 1920’s as part of an irrigation complex fed by the Brazos River, Oyster Creek had become clogged through the years with silt. Bottom deposits had reduced water depth to a maximum of three feet-as little as one foot in some places. The water for irrigation was being restricted, fish life was threatened, and Imperial’s supply of cooling water for its giant refinery was dwindling.

A “Mud Cat” is on the job right now. clearing the canal to a depth of 10-1/2 feet, from shore to shore, for a mile and a half of its length. The machine’s discharge of 200 gallons per minute contains 10% solid soil that is being used in filling low areas along the canal to make them more suitable for pasture.

When this same work was done over forty years ago, the dredge used was 100 feet long, 30 feet wide, and required 10 years to do the work. “Mud Cat” is only 30 feet long and 8 feet wide. It is expected to finish the Oyster Creek job in less than two years.

Detroit Diesel engine provides the power – Nestled low between the barge’s two hulls, it provided 175 horsepower and turns a Morris 6CK pump, plus hydraulic pumps that run the 8-foot shielded auger at the intake point and the winches that propel the unit along its cable “track.” The entire package including flexible tubing for intake and discharge, can be trailered on the highway between jobs.

Many “Mud Cats™” are presently in service in all parts of the country. A product of the “Mud Cat” Division of Mud Cat International, they are available to anyone interested on a lease or purchase arrangement.