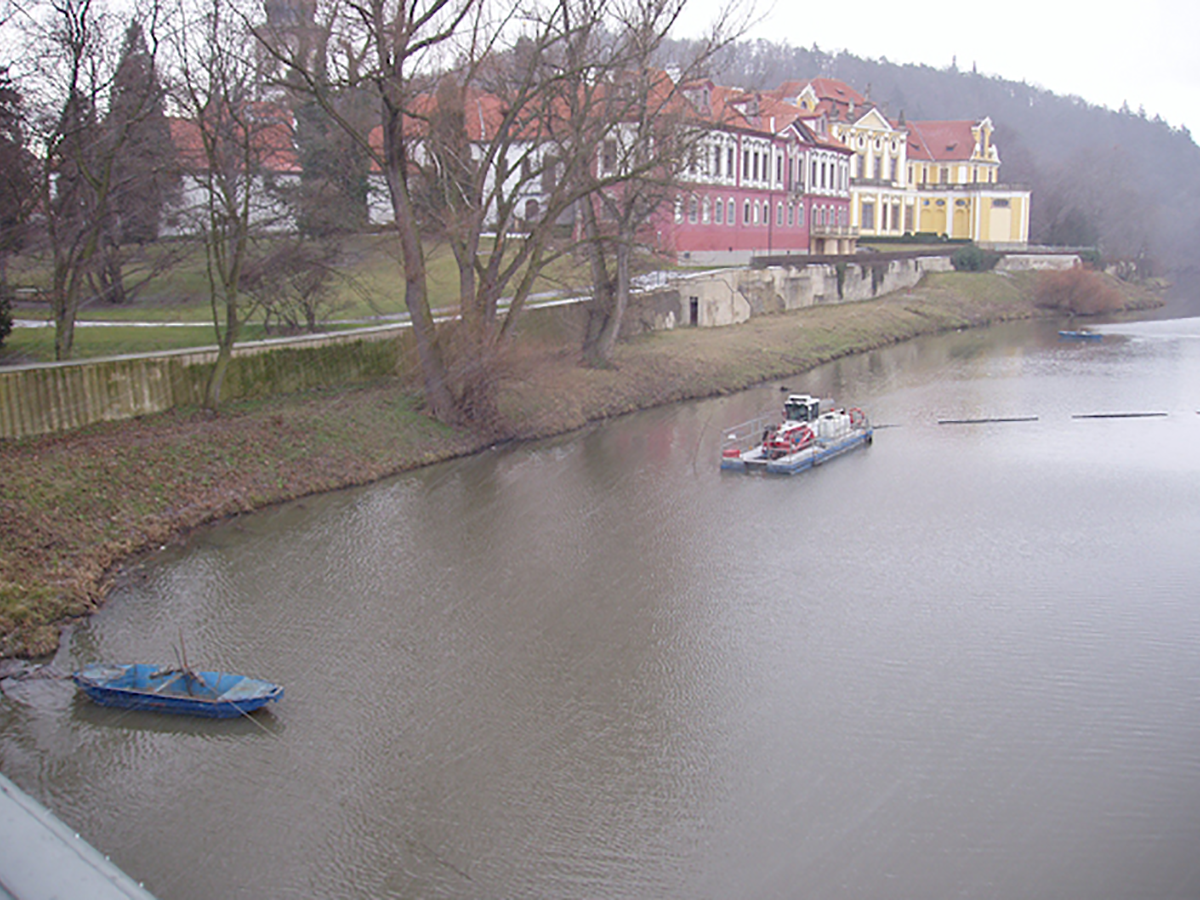 A new field of engineering in Denmark

New methods are being used in restoring Lake Brabrand in cooperation with Aarhus Municipality, Aarhus County, and Per Aarsleff, Inc. The project is being followed with great interest.

Lake Brabrand in the western part of Aarhus, Denmark is heavily polluted by phosphor and is also getting filled with mud and sand. Life is dwindling in the lake because of oxygen shortage and because of algae. The lake bed is covered with large amounts of silt. The silt is the result of waste water from industries, households, and agricultural run-offs to the streams leading to Lake Brabrand – as well as from waste water pipes which, in the past, have run directly into the lake. In 70 years no lake will remain if corrective measures are not taken.

Consequently, a decision has been made in both Aarhus Municipal and Aarhus County Councils to clean and restore this important recreational area for the some 250,000 people living in and around Aarhus.

For years, exploratory work has been going on to estimate the extent of the pollution and the need to take corrective measures. It became increasingly clear that new methods to solve the problem would be required.

Ordinary pumping could cause major damage to the lake bed and, moreover, there is some risk that the water resistant layer separating the lake water and the ground water would be damaged. In some areas, this layer is only between four and five meters thick. Pumping could create a direct link between the polluted lake and ground water should a hole be made in the water resistant layer. The result would be equal to pulling the bathtub plug: the water from the lake would seep into the ground water which in this particular area is the most important water supply source for Metro Aarhus.

Peeling of the lake bed layer
The solution decided upon to remove the polluted layer was an auger dredge from the Mud Cat Division of Mud Cat International in the US. It is capable of carefully peeling the upper layer of the lake bed to the exact depth required. The Mud Cat has been used in Sweden and in the US where it was first put into production in 1971. The Swedes have been successful in employing the Mud Cat in some of the more heavily polluted Swedish lakes.

In cooperation between Aarhus County – which holds the overall environmental responsibility and Aarhus Municipality – where the lake is located, and the engineering firm, Per Aarsleff, Inc., the work has now started.

A total of 450,000 cubic meters of silt will be peeled from the lake bed by the highly efficient auger dredge which can float in as little as 2 feet of water and cut a swath 2-1/2 meters wide to depths of nearly 5 meters with very low turbidity. A heavy duty centrifugal diesel powered pump will push the silt through a flexible pipe. From there, it will pass through a 200mm diameter floating pipe onto land and into three large settling pools. From the settling pools, the water will be piped into a cleansing pool after which it will be returned to the stream.

When the silt has dried, it can be dug up and returned to the fields. The high phosphor content makes it quite suitable as a fertilizer. Biologists have measured the presence of other materials such as heavy metals and have determined that they are so small that they will not cause harm to future harvests.

Should the distance from the Mud Cat to the settling pools be more than 1000 meters, an additional pump station with a capacity equal to the Mud Cat diesel pump will be installed.

Need for new settling pools
” But there will be a need to establish a new site for the settlement pools and for the water cleaning installations when the Mud Cat starts working in the far end of Lake Brabrand. We will begin working the most westerly end where as much as 60 cm silt deposits have been identified,” says Jorgen Buur, Chief Project Engineer for Per Aarsleff, Inc.

“The Mud Cat is moved around the lake by a winch and by wires which are mounted in a net-like fashion across the lake. Following this procedure, it can peel a layer approximately 2-1/2 meters in width each time it is winched across the lake. Mounted on the front end of the machine is a rotating auger which carries the silt to a mouth piece from which it is sucked up and pumped away into a settling pool. The auger can be lowered to the desired depth so that only the exact thickness required will be peeled off. In some areas that layer is 60 cm deep, in others only 30 cm deep. In order not to disturb the natural sedimentation of the lake bottom, such word will be undertaken in several rounds.”

“The dredging work will take five to six years. In considerations of the wild bird life, work must be executed only during the period July 15 and December 31. However, since the Mud Cat makes very little noise, it is possible that the period may be extended. The Mud Cat can pump up to 450 cubic meters an hour, but the solid material contents amount to only some 20 per cent. Consequently, there will be a minimum of 5,000 word hours for the Mud Cat before the lake bed has been cleaned to the extent considered necessary by the technicians for us to recreate a clean lake,” says Buur.

We have also taken into consideration the fact that an expansion of the existing cleaning installations has taken place and that work is still going on in the cities along the streams and creeks leading to Lake Brabrand.”

More extensive work than anticipated
But what about the lake filling up with clay and sand?

“Included in the work to recreate the lake is the removal of 30,000 cubic meters of sand where Aarhus Creek runs into the lake. This work has now been finished, but it turned out to be a larger task than originally anticipated, because the area from which we removed the sand was very soft.

“Consequently, we had to remove the sand in repetitive moves. Furthermore, we had to stabilize the access roads and the work areas with heavy duty Fibertex. At the same time, we have built a small harbor for the Mud Cat at the mouth of the creek in order to protect the Mud Cat and the work boats in severe weather, during repairs, etc. To prevent the mouth of the creek from becoming covered with sand again, we have built a large and deeper sand catchment basin a fair distance upstream. Every year the sand will be removed from this upstream site and taken away,” says Jorgen Buur.

“The only experience we have had is from the US and from Sweden, but we have not been able to transfer and apply their methods directly. The area west of Lake Brabrand consists of an incredibly soft sub-soil. Consequently, we added substantial amounts of fill around the settling pools, much more than originally anticipated. Huge amounts of Fibertex have also been installed to stabilize the entire site.”

“All along, we have gained new experience as the project has progressed. Compared to the base project with which we started out, changes have been made on a recurring basis.”

“Already before starting out, we were very uncertain about the extent of the work and, quite naturally, we have tried to include that factor in our cost estimates. But in terms of time, it does make a difference when we have to undertake unforeseen additional work. However, a spirit of pioneering has prevailed throughout the project because it is a new method, a new form for cooperation between Municipality, County, and engineer – and because this is a pilot project for future lake renovations.”

Hoping for more lake cleaning projects
” Of course we hope that the experience we gain here can be used and applied to other, similar projects in the future. If lake restoration projects do catch on, we will certainly consider acquiring our own Mud Cat. It is a piece of machinery with many advantages. It takes account of the environmental factor and it peels only thin layers off the lake bed,” stresses Jorgen Buur.

In the third phase of the project “Clean Lake Brabrand”, the Mud Cat went into action and began peeling the first centimeters off the silt layered lake bed.

When the entire project has been implemented, the cost for Aarhus Municipality will be some 27 million Danish Kroner. At that time, engineers, politicians, and citizens alike hope to reestablish a rich fish and wild bird life in and around the clean and clear Lake Brabrand.