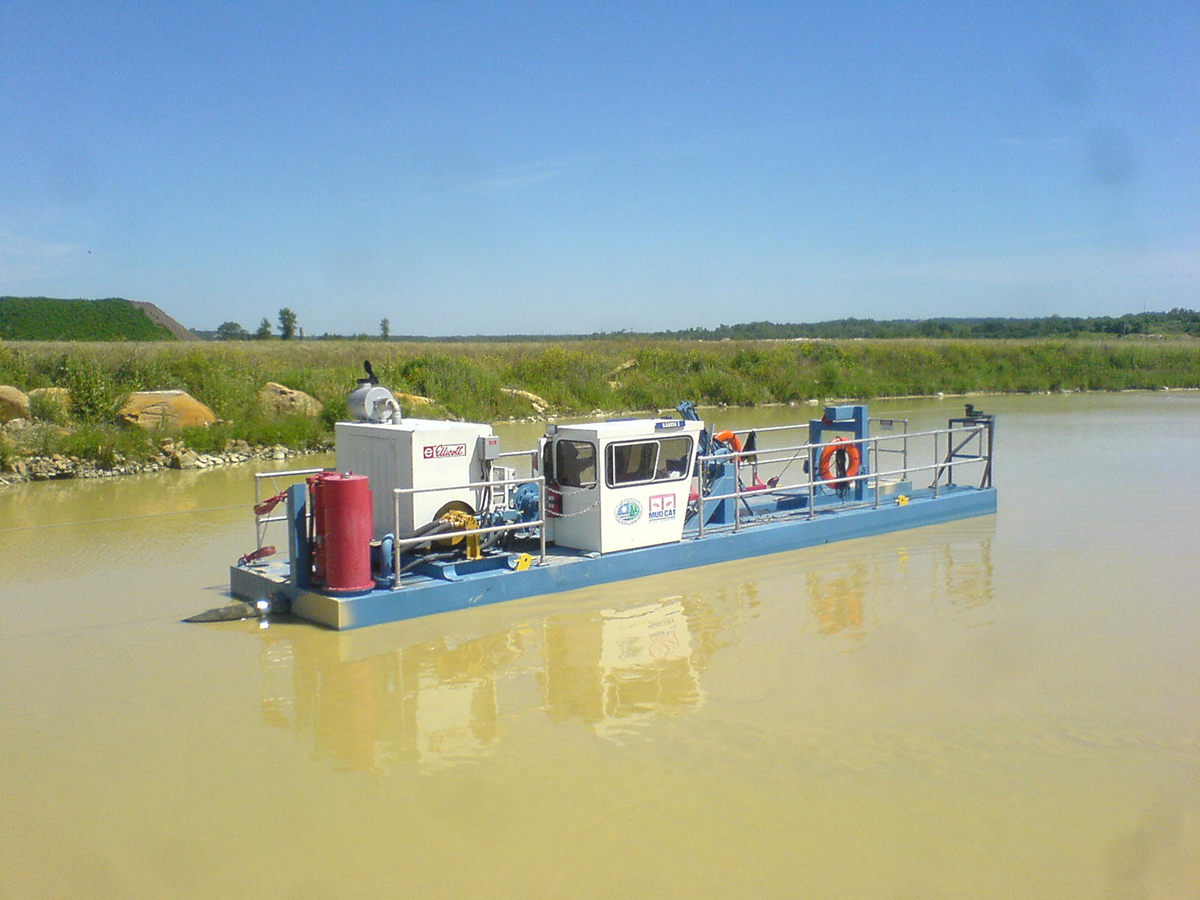 IT Corporation, one of America’s largest environmental remediation companies, is using a Mud Cat MC-2000 to dredge the West Palm Beach Canal in Florida. The canal water is eventually pumped into the Everglades, forming part of the extensive Everglades Restoration Project. The South Florida Water Management District contracted with IT to complete this work.

The canal extends from the eastern shore of Lake Okeechobee (“big water” in the Seminole Tribe language) in southern Florida. The lake is often referred to as the “liquid heart” of South Florida’s ecosystem. Removing 40 years of accumulated sediment and debris from approximately six miles (10 kilometers) of the main discharge canal from the lake, as required by the Everglades Restoration Project, is a formidable task.

IT’s Site Engineer, Mike Harding, says, “The MC-2000 is a good machine for this project. The straight auger works best in this situation. It gives a cleaner cut for silt to the negative 4 foot (1 meter) dredging depth required.”

The MC-2000 combines the precision of the smaller and slower MC-915 model dredge with the robustness of the larger Series 370 Dragon™ line. It has the capability to go 20 feet (6 meters) deep and is a more rugged, thicker hulled, bigger augered dredge to accommodate contractor needs on this project. The MC-2000’s 24-inch (610 millimeters) auger and 8-inch (203 millimeters) submerged pump can produce 2,800 gallons (10,600 liters) per minute at 146 feet (44 meters) of head, powered by a 272 HP Caterpillar engine. This larger capacity and increased durability machine can provide major cost savings to contractors on small projects.

Released in June 1999, the MC-2000 sets the standard for high performance among all horizontal auger dredges. It combines Mud Cat’s reputation for durability and reliability with Mud Cat portability and output.

The MC-2000 one-truck-transportable dredge was easily slipped into the head of the canal at the start of the West Palm Beach Canal Project in March 2000. Excelling in both environmental and general contracting applications, this dredge’s principal features, particularly applicable for the West Palm Beach Canal Point project, are its 20 foot (6 meters) maximum digging depth, automatic shroud for turbidity control, and forward and reverse digging. The MC-2000 dredges 400-500 feet (approximately 120-150 meters) of the canal on any given day, spanning its 21 foot (6 meters) width with three lateral moves overlapping to insure that all material is picked up.

Other recent successful MC-2000 projects include the clean up of a pond on a U.S. Army base where the dredge produced 2500 gallons per minute (9,500 liters) of slurry with over 30% solids content, and channel maintenance at Ocean City, MD where the dredge’s production rate exceeded by 30% the output from a comparable size dredge previously employed by the contractor.

There are lots of fallen trees in the canal that must be moved aside during dredging. A total of 300,000 yds3 (230,000 cubic meters) will be dredged by the completion of the project.

IT’s Dredge Operator, Mike Brouillette, says, “We’ve found everything in that canal from debris as large as Australian pine trees to objects as small as soda cans. When we hit the tree trunks we have to move them to the side of the canal before proceeding. Lots of vegetation like lily pads sit on top of the water, but the dredge moves right through them.”

The Florida Department of Environmental Quality established that trees must stay in the canal as a criterion for the West Palm Beach Canal Project. They are necessary as hiding places for the smaller baby fish and for nesting habitat. The canal’s current moves so slightly that fish can get behind a limb and stay in one place.

The large wetland region surrounding this lake extends from the Kissimmee River to the Florida Everglades. It is the second largest freshwater lake wholly within the continental United States. It is a direct source of drinking water for the local communities and a backup water supply for east coast communities during drought conditions. It provides irrigation water for the Everglades Agricultural Area to the south and is important for its sport fishing opportunities, generating state and local tourism dollars.

Lake Okeechobee has been harmed by excessive nutrients entering its water from agricultural activities in surrounding areas. Because the lake has received large doses of phosphorous for more than 50 years, it has accumulated thousands of tons of phosphorus in its upper sediment layers. This enormous amount of phosphorus could severely delay the lake’s recovery from pollution even though new phosphorus inputs from the watershed have been greatly reduced.

The District has a comprehensive research and modeling program that is designed to assist decision-makers in protecting Lake Okeechobee and downstream ecosystems, including coastal estuaries and the Everglades.

A healthy canal will help provide critical water needs to human and wildlife inhabitants of south Florida for years to come.