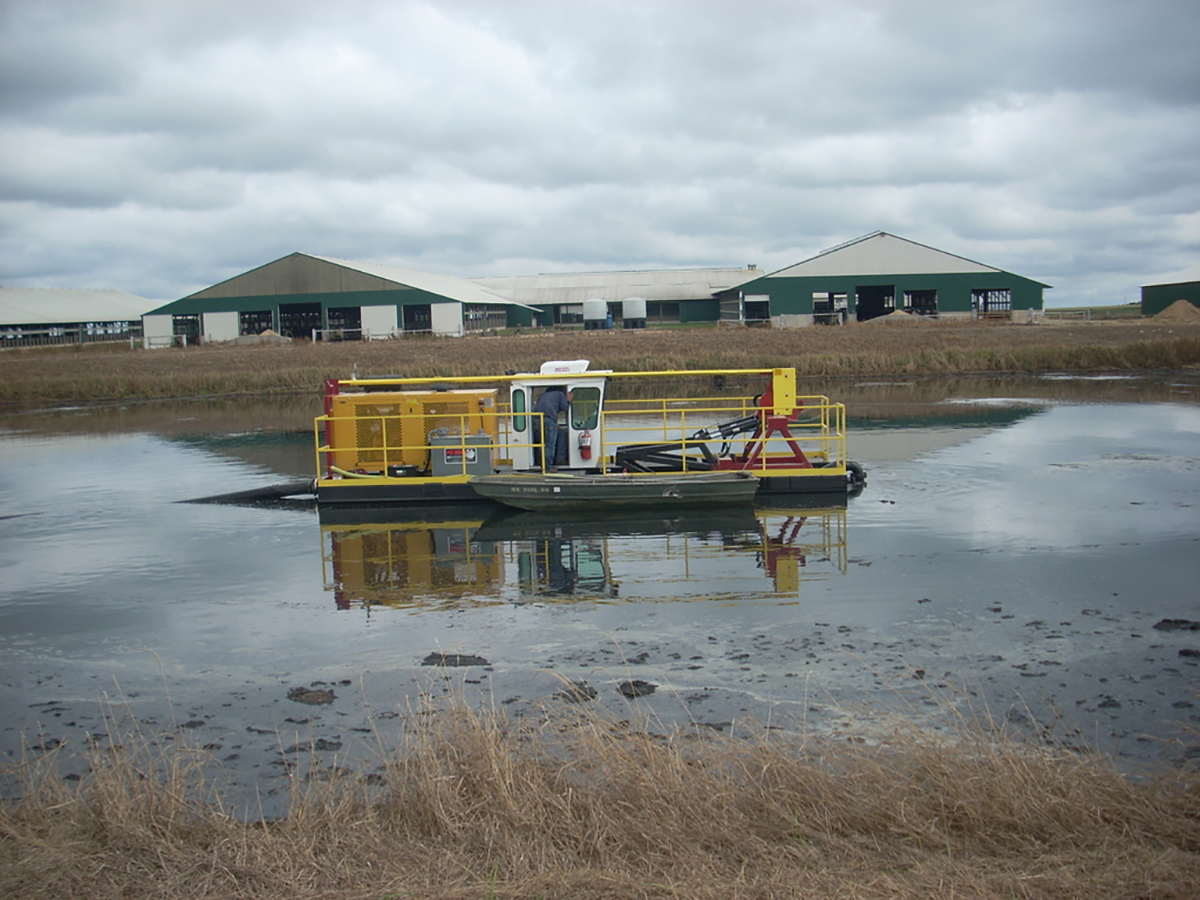 Contractors are an adaptable breed of men. Texas contractor J. Lee Milligan, Inc., of Amarillo is no exception to the rule. When the grizzled Milligan got the job of cleaning out the lagoon of the Mesa Verde Feed Yard in Wildorado, up the Texas panhandle, he went out to look the job over with Brad McFadden, Mesa Verde manager.

The body of the water had not been cleaned since it first went into service. The collection of silt and sediment, added to the manure buildup, decreased the water depth from 15 ft (4.6 m) to as little as 5 ft (1.5 m) in some areas.

Consequently, the lagoon could no longer maintain the level of capacity required by the Texas Water Quality Control Board. According to regulations, the flat-floored basin must be capable of retaining all of the runoff created on the feed yard during the heaviest rainstorm recorded in the past 25 years. Once a lagoon is 20 percent filled with solids, the board figures that this capacity no longer exists. Mesa Verde had reached that level.

Dredge vs. Dragline
Milligan and McFadden first discussed the use of a big dragline to remove the manure. They decided against it, however, because of the time involved, cost, manpower required, disturbance to the cattle, and the rehandling of the excavated spoil material. They agreed that the cleaning out operation could be handled cleaner, faster, and cheaper by a small dredge. They got in touch with Mud Cat International of Baltimore which markets and sells the Mud Cat.

In less than two weeks, the dredge was shipped in, set up, and put into operation. After a few hours of training, the contractor’s operator was running the machine and the cleaning process had begun. Dredging with the Mud Cat, 8 ft (2.4 m) wide by 30 ft (9 m) long, was a two-man operation–one to run the machine itself and the other to handle shore duties, such as moving pipes and cables. A 175-hp diesel engine powered the dredge, which can work in as little as 27 in (69 cm) of water.

By means of pullover cables anchored on shore, the Mud Cat moved from side to side, cutting up to 18 in (46 cm) of sediment on each pass of its 8-ft (2.4-m) wide auger. The machine used at Mesa Verde can work down to depth of 10.5 ft (3.2 m), but newer models can reach 15 ft (4.6 m). An auger assembly at the end of a hydraulically-operated boom is lowered into the water during dredging, turning and forcing waste material into an intake tube. The material is then pumped through a discharge pipe to a designated spoil area.

The spoil area is a 65-acre (263,055 m3 ) wheat field, owned by Mesa Verde and located more than 1/4 mi (0.4 km) from the lagoon. As the lagoon is pumped out, various sections of the discharge pipe are removed, allowing for distribution of the material over the wheat field. “With the fertilizer shortage, this method of disposal is excellent for us,” said McFadden.

According to Milligan, the dredge operated with a minimum of downtime, and averages over 100 cy (76 m3) of pumped material per hour. The lagoon may not have to be cleaned out for another 5 or 6 years. Milligan bills the job by the hour, and the total cost was expected to be under $25,000.