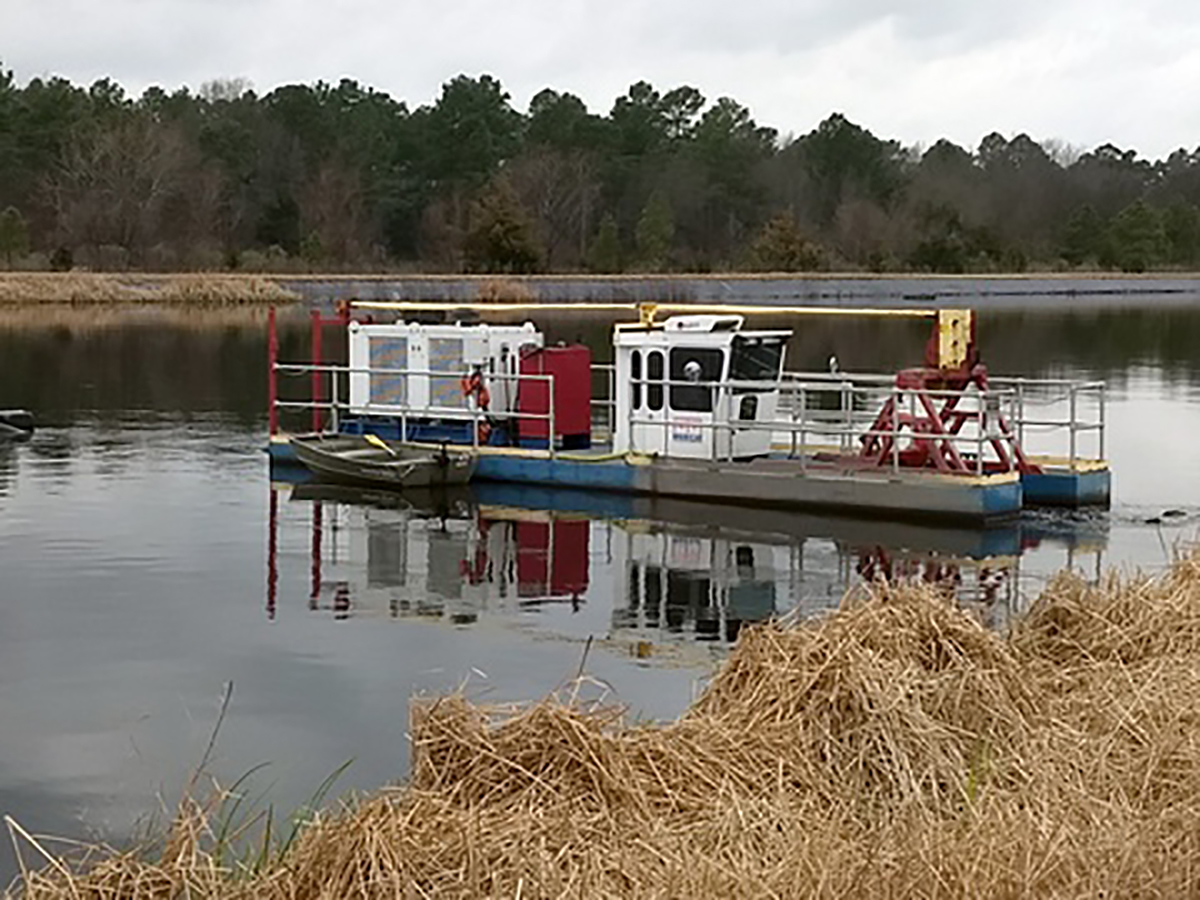 For years, the residents of Olathe, Kansas, watched their North and South Frisco Lakes fill with tons of dirt, mud and all sorts of debris. And for years only the water flowed back out again. Originally, one of the main functions of the lakes was flood control. But in recent years, much of the overflow found its way – just where it wasn’t wanted – in people’s basements.

The Mud Cat is easily transported from site to site and can be launched and retrieved quickly. Generally, a crane is used for this purpose. Prior to placing the machine in operation, an anchored cable network is established and a pipeline is assembled. A portion of the cable is threaded through a winch mechanism which propels the machine in the forward and reverse directions along a guide cable. After the cable is properly tensioned, the Mud Cat is ready to be operated.

The first job was to clean out a path deep enough for the Mud Cat to float and for a small boat to run to and from the bank carrying men, fuel and debris removed from the machine’s intake lines.

Materials are excavated as the machine moves in both the forward and reverse directions. Several passes are normally required in the same cut to excavate underwater materials to a predetermined depth. When all the material is excavated in a given cut, a “pullover” is made to laterally reposition the cable guide and the procedure is repeated.

The machine works by sucking water, silt and mud in through an auger excavator at the front end, then pumping it through some 2000 feet of floating and grounded pipe onto land. The process comes to a halt if the pump draws in something other than mud. In North Frisco, Cline said the machine has been jammed by old tires and railroad ties.

The purpose of this project is three-fold: First, flood control; second to shore up the shores, making recreation areas more attractive; third to restore the ecosystem of the lakes and make them a good place to fish.

The Mud Cat and its crew pumped some 50,000 cubic yards out of North Frisco and no doubt another 50,000 out of the south lake. The silt will be used to build up the bank of South Frisco, allowing that lake to hold even more water.

The Mud Cat has proven to be a wise investment to the City of Olathe.

Reprinted from Land and Water Magazine