Fort James Corporation (NYSE:FJ) announced on November 9, 2000 that it had completed the environmental dredging project designed to remove up to 50,000 cubic yards of PCB-contaminated sediments near its West mill in Green Bay.

Sevenson also relied on Mud Cat to perform a tight schedule modification to the dredge, increasing its digging depth by 50% to 30 feet (9 m).

EPA SAYS: “WE REACHED THE GOALS WE SET.”

Fort James met all of the objectives outlined by the Environmental Protection Agency (EPA) and the Wisconsin Department of Natural Resources (WDNR). This removal project covered the most concentrated PCB hot spot in the entire river, and reduced PCB concentrations from over 300 PPM to just 2.2 PPM on average, a 96% improvement from the 47.9 PPM results after a similar project the previous year with a different contractor using different equipment. A floating silt curtain (see picture, in front of dredge) successfully curtailed turbidity and PCB resuspension during dredging.

EPA representative Sam Borries said, “We reached the goals we set and are happy with the results.” State of Wisconsin Department of Natural Resources Secretary George Meyer added, “It should truly be a day of celebration.” The Sierra Club also expressed its pleasure at a December 2000 meeting to review the results.

Sevenson’s success contrasted markedly with a failed October 1999 project where another contractor was unable to complete the specified volume of sediment due to inadequate equipment.

When Fort James committed to the work in May 2000, it released the following comments:

“The DNR is pleased that we, Fort James and the EPA have been able to come to an agreement to proceed with the cleanup of this site,” said George Meyer, Secretary of the Wisconsin Department of Natural Resources. “The agreement represents another important step in the development of the final RI/FS that will be completed later this year.”

“Completion of this dredging project will alleviate concerns that some people have raised regarding this portion of the river,” said Kathleen M. Bennett, Fort James Vice President of Environment, Safety & Health. “We think it is in everyone’s best interest to finish what was started last year. This project is a good example of what can happen when business works together with state and federal agencies to find effective solutions for communities.”

Sevenson separated the sediment from the water and sent it by truck (2,500 truck trips!) to a landfill owned by Fort James, where it was permanently buried in a secure cell. The separated water was treated and sent back to the river.

EPA Project Manager Jim Hahnenberg noted that the cooperation of the paper companies involved and the success of this dredging have enabled the EPA so far to defer putting the site on the Superfund list.

Fort James Corporation is a leading international consumer products company. The company currently has approximately 50 manufacturing facilities in the U.S., Canada and 11 other countries around the world, and had $6.8 billion in sales in 1999. George Pacific acquired Fort James in late November, 2000, after the end of this dredging project. 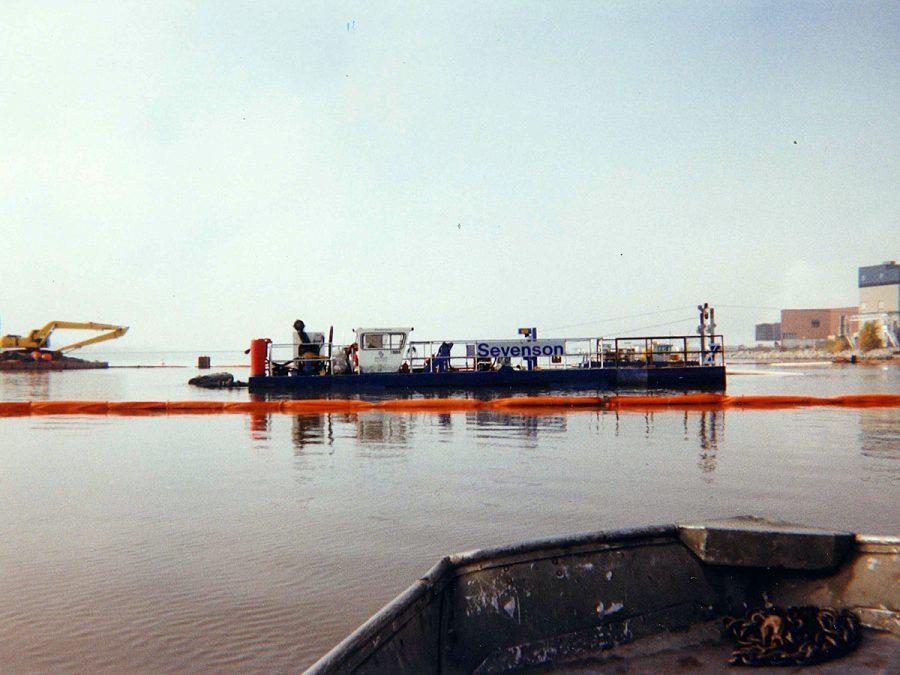