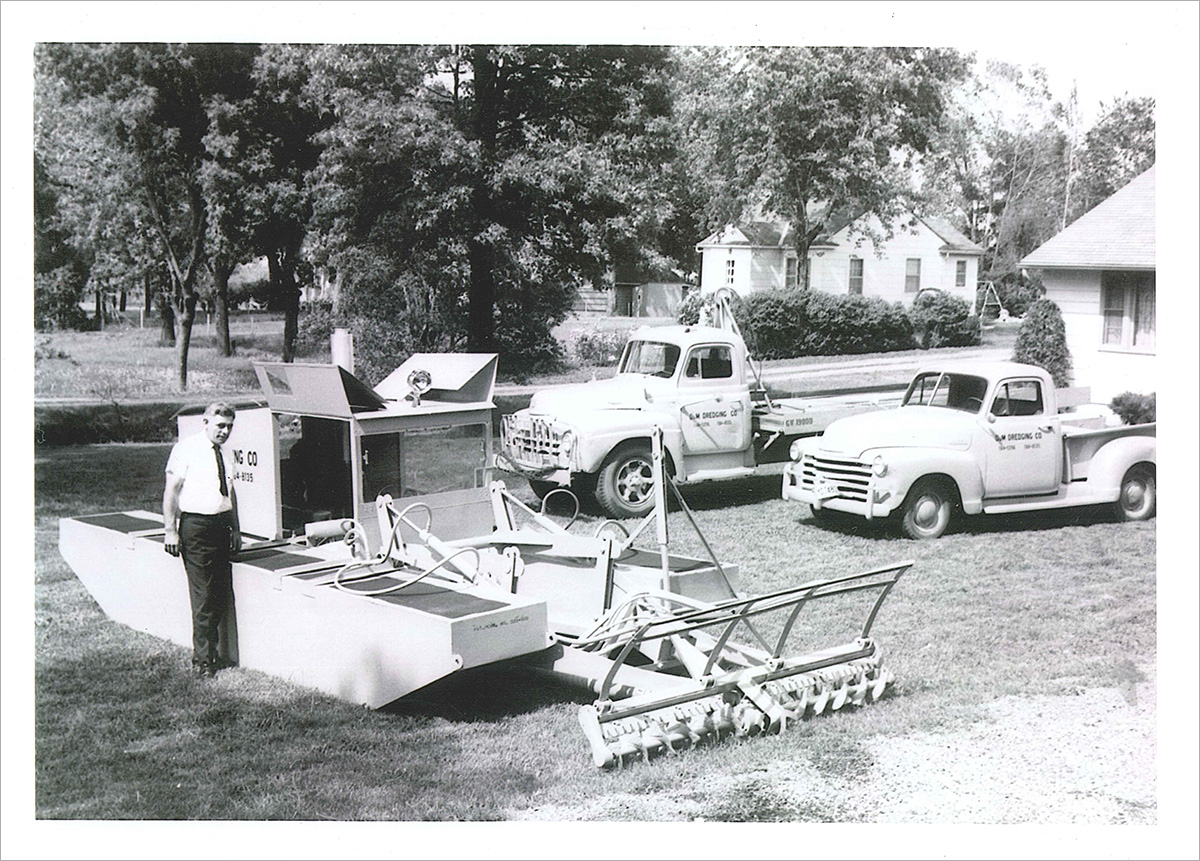 Mud Cat – The Story of an American Icon

In 1962 Norbert Degelman and Harold Morgan came up with an idea to solve Minnesota’s lakeshore siltation issue. They built the first portable dredge in a one car garage in the suburb of Fridley, Minnesota. The system was comprised of a roto-tiller type cutterhead, pontoons, operator’s cabin, and a centrifugal pump. Their first attempt was a very crude and cumbersome machine that didn’t float too well, but the idea of using the auger-type cutter proved very successful.

After three years of perfecting this first prototype of the auger dredge, they decided that they were on to something. They found some investors and formed their first company. They also came up with the name Mud Cat which to this day people around the world use the Mud Cat name to refer to any small dredge. They built four more dredges and started the first auger dredging company.

The investors decided to take this idea to National Car Rental to promote the concept of rental dredges. National liked the idea and bought the manufacturing rights in 1970. This was the beginning of the second generation of the Mud Cat dredge. National built over 500 units over the years and marketed the ideal globally. You can still find these 2nd generation Mud Cats in service today.

In 1987 Ellicott, the largest and oldest dredge builder in the Americas purchased Mud Cat from National Car Rental. Mud Cat continued to grow by introducing new dredge models and technologies that helped shape the portable dredge industry and made it what it is today.

Today, Mud Cat has over 1,000 dredges operating around the globe from mine ponds in the Congo to underground sewers in Singapore. The Mud Cat brand absorbed the LWT brand in late 2015 and is is part of the EDT (Ellicott Dredge Technologies, LLC) company which also manufactures the IMS Dredge product line: www.imsdredge.com.

Following in the footsteps of the founders Norbert Degelman and Harold Morgan, Mud Cat is leading the small dredge industry with the following technological advances: advanced automation, ROV submersible crawler dredges, and many other exciting new technologies that are used in the wastewater, mining, power generation and environmental sectors around the globe.

Mud Cat’s state-of-the-art 75,000 ft. factory/ 9,000 square ft. office is now located in New Richmond, WI (40 minutes East of Minneapolis / St. Paul International Airport) about 40 minutes away from where the first Mud Cat was manufactured in 1962 in Fridley, Minnesota. It has 70 full-time employees. Mud Cat also has a Sales Office in Overland Park, Ks that has 4 full-time employees.

Mud Cat is recognized around the world as an iconic brand synonymous with the word “dredge.” Over a billion cubic meters of sand, sludge, mud and hazardous waste have been dredged with Mud Cat dredges. Mud Cats from the first year of manufacturing are still operating today which is no surprise considering their motto is:

“The only way to stop a Mud Cat…is to turn off the key.”