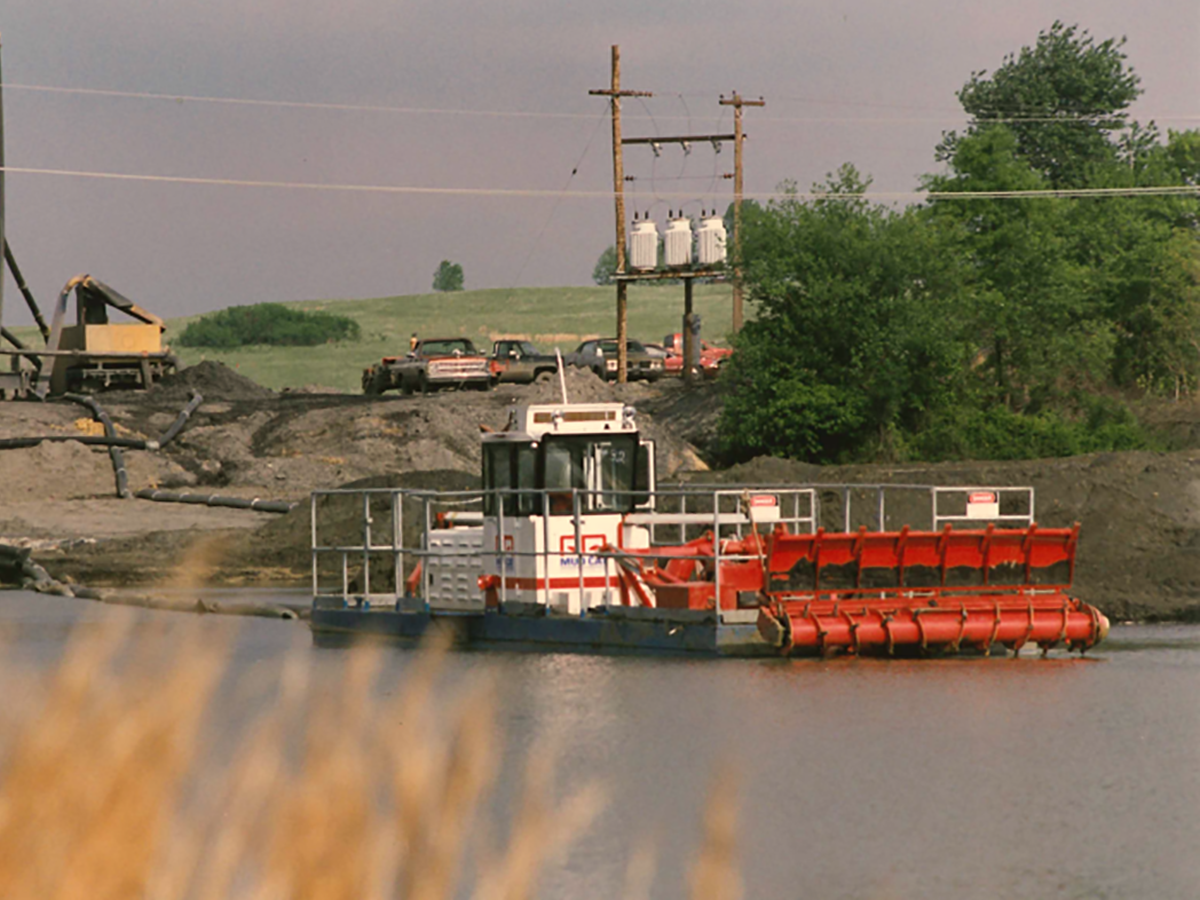 The Mud Cat auger dredge, a quality heavy-duty mini-dredge with a huge appetite for coal fines, is performing beyond expectations for Paul M. Taylor Augering Company of Madisonville, Kentucky. Manufactured by the Mud Cat Division of Mud Cat International, Baltimore, USA, the patented Mud Cat has proven highly successful for coal fines recovery since 1974. Its success here is just another example of the versatility of this reliable dredge whose performance sets the standards by which others in the industry are measured.

Coal fines, once the discarded waste from mines and coal preparation plants, are now a usable resource in demand by the nation’s utilities. Large quantities of this valuable resource which have lain in impoundments for up to 50 years can be recovered profitably. Most of the coal fines are immersed in water which has preserved their heating value or BTU’s. Today’s technology and coal pricing have made the recovery of coal fines feasible.

Mine personnel selected a site on one of their ponds where there was an abundance of quality coal. The designated area was flooded with a shallow water cap prior to launching the Mud Cat. From this point, the dredge literally ate its way into the pond. Downward boom force (“crowding”) allowed the operator to lower the powerful auger with its cutter knives into the material to excavate a pool of sufficient depth to float the shallow draft dredge.

As the Mud Cat eats its way forward, it pumps slurry from the pond through several hundred feet of 8-inch pipeline to the recovery plant. The material discharges onto a bar-screen which removes 3/4-inch plus material and allows anything smaller to fall into a surge tank. A centrifugal pump then pumps slurry from the tank vertically to pair of cyclones which separate the desirable and undesirable coal fines. A collector receives the desirable coal fines after separation and directs them to a pair of dryers. From the dryers, the coal fines fall onto a 5 foot wide conveyor which stacks the coal for shipment.

The low sulfur and ash content of the recovered coal enables Andalex to blend it with otherwise marginal coal to produce an acceptable product for its customers. Adjusting system pressure or flow rate to the cyclones permits the sizing of the coal fines, sulfur content, and ash content. Therefore, depending upon the quality of the incoming coal the recovery system can be programmed to provide the desired end product.

The targeted annual production of this operation is 20,000 tons per year. Production currently ranges from 50 to 60 tons of dry coal per hour, but the system has achieved up to 70 tons.

And what does Paul M. Taylor Augering think of the Mud Cat dredge? According to Mr. Crook, “When you look at the design of the Mud Cat, you can see that a lot of thought went into it. It’s built for heavy-duty service which you need in the coal industry. Mud Cat Field Service Engineer, Mr. Jerry Gladwell, was very thorough in training our people on both the operation and maintenance of the dredge. He got us off to a good start.”

Mud Cat has numerous other successful experiences with coal fines recovery at rates up to 200 tons per hour using larger cutter head dredges. The right size depends on the reserves available and desired production rate.

Mud Cat International’s Mud Cat Division is the world’s leader in small portable dredges from 6-inch to 10-inch sizes. In addition to auger dredges, Mud Cat and Mud Cat offer cutterheads and bucketwheels in standard designs for a variety of dredging applications including lakes, industrial and municipal ponds, mining and mine tailings recovery, with digging depths from 10′ to 33′. Custom designs are also available.